This is a private area for NDS clients

The Spaniards Pere Permanyer and Francisco Xavier Bultó Marqués , better known as Don Paco, father of Álvaro Bultó and grandfather of Sete Gibernau , founded the Montesa motorcycle brand in 1944 . Don Paco left this company due to the abandonment of the competition, because he believed that innovation in motorcycles was intimately linked to the world of competition, and founded on May 17 , 1958 Bultaco in Barcelona .

The name of the brand is Bultó's own invention (many people mistakenly believe that it is due to the Gibraltar pilot John Grace , who thought it would be a good combination of the surname of the founder, Bultó, and his name, Paco), that he had been using it for years as his particular telegraphic address. The particular logo , designed by Don Paco, is a thumbs-up sign that everything is going well.

In 1959, the Bultaco Tralla 101 was born . The founding group was immediately installed in Mr. Bultó's house, in the Masía de San Antonio, Cunit. While they were organizing a factory, they started designing the first bike. The prototype was ready in only four months and on March 24, 1959 the Tralla 101 2 , the first Bultaco, was presented to the press.

On October 2, 1960 Bultaco beat five world records of long distance speed in the circuit of Monthéry (France), with a spectacular prototype of 175 cc. Two of those records corresponded to its cylinder, but they beat two more in category 250 and another in 350 cc

In 1964 Bultaco was introduced to the market and competition of trial bikes with the Sherpa model. You can consider the Sherpa S two-stroke as the first motorcycle made expressly for the practice of this sport. They signed the driver Sammy Miller to compete and, despite the unfavorable bets made by the press, managed to beat the first test in which they competed, the first time he won a non- British motorcycle.

No driver left such a deep impression on Bultaco as a timid boy from Sabadell: Ramón Torras. "The fastest driver I ever met" according to Paco Bultó himself. Torras must have been the world champion, but on May 30, 1965 he died in a local race, preparing the Tourist Trophy of the Isle of Man. 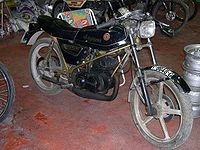 After a major crisis in which the Ministry of Industry forced Montesa Honda to buy the Bultaco brand, along with other brands such as OSSA and Mototrans (manufacturer of the Ducati in Spain). Bultaco disappeared a while as a manufacturer. Other Spanish brands such as Montesa and Sanglas were absorbed by the arrival on the market of Japanese brands such as Suzuki , Honda and Yamaha , respectively.

Bultó asked the management of Montesa, with JL Milá in charge, the mercantile rights on the logo and the Bultaco brand, alleging that they had no value for Honda. Montesa granted this free transfer of industrial property free of charge and it was thanks to this transaction that in 1999 the Derbi brand resurrected Bultaco with a reissue of the Bultaco Lobito and the launch of a sportswear line with the logo.

On May 17, 2014, the same day that celebrated the anniversary of its founding and the birth of its founder, Paco Bultó, Bultaco announced in London its official return to the motorcycle market by presenting the world the first prototypes of its new spectrum.

Bultaco is reborn with the mission to continue doing what it would have done today if it had not ceased manufacturing its motorcycles in 1983: offer fun and new technology on two wheels.

Currently, Bultaco maintains the spirit of always the Rampant Finger, faithful to the traditional values ​​that made the brand founded by Paco Bultó mythical: passion, innovation and competition.

In 2015 Bultaco launches the Brinco , the electric Moto-Bike that combines its 100% electric propulsion, controlled directly by fist and independent pedaling. Initially it was a model not approved and exclusively used in circuits and private farms, the Brinco R, with a top speed of 60 kilometers per hour and only 40 kg of weight.

Later, in 2016 launched models of Brinco, such as Brinco RE, Brinco C and a limited edition created in association with the Land Rover car brand, the Brinco R Discovery Ltd.

Already in 2017, for the acceptance that the electric concept of the motobike had had in the offroad environment, Bultaco decided to launch its urban concept, the Albero, an approved electric moped that reaches 45 km / h.

Bultaco in the competition

(Apart from these models, prototypes were also designed, such as the Bultaco Gaviota and Montjuich )

Tell us about yourself and your BULTACO, participate in the quarterly raffle of clothes and accessories